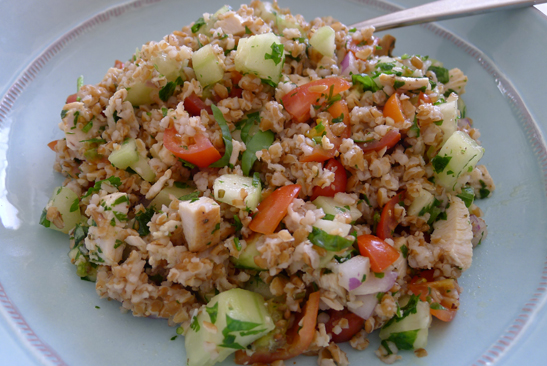 The other day I had what can only be considered an epiphany: I like to cook. Just not every day. And not to go all new-age mindful on you, but recognizing this was such an emotional release that I instantly sat down. Whew!

That lasted all of 11 seconds before I was up and at ‘em, staring at my cookbook collection as if it were the Holy Grail. Which it is, in a minor, non-secular sense I suppose. Here, within the thousands of pages and hundreds of thousands of recipes were enough ideas to last until the end of time. Not unlike my love handles, really.

Left to my own devices, I’d probably prepare chili, tacos and split pea soup seven days a week. Today, though, to honor my epiphany, I needed something new. Something…wow. Something like Cooking Light’s Greek Bulgur Salad with Chicken.

A few years back, Cooking Light did a brown-bag lunch club feature; recipes to make for 10 of your favorite colleagues, or at least people whose cooking you trusted enough to permit them the joy of cooking for you. I figured I could use these recipes for general pot-lucks, book clubs and all manner of lunch-time leftovers. I started with the bulgur recipe primarily because it featured a grain I’d never used before. To make this gluten-free, however, I’m using buckwheat instead.

You definitely want to get started early on this one. The chopping involved requires either coffee and the Cooking Channel (AM edition) or wine and the Real Housewives of Wherever (PM edition). I used precooked chicken; if you follow that path, just be sure to taste before adding salt and pepper. Sadly, there really aren’t many more short cuts than that, unless your market happens to carry chopped tomatoes, cucumbers or onion.

All that work pays off though. You’ve got a ton of food, enough to last a few days at least. Depending on your tolerance for leftovers, you can still enjoy this two to three days after its debut. Which gives me plenty of time to sit around and wait for my next epiphany. 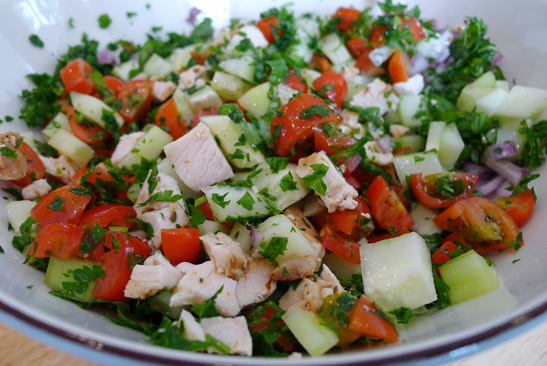 Serves 10 or more. This endlessly adaptable salad takes full advantage of whatever left-over veggies you have in your produce drawer. Use the meat of two store-bought rotisserie chickens if you’re pressed for time. If you like, halve the recipe and you’ve got lunch for a few days.

Adapted from a recipe by Cooking Light.