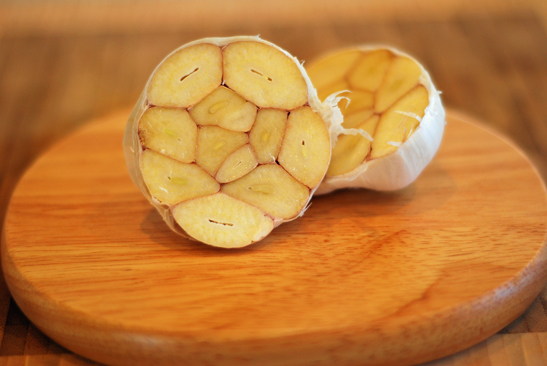 I love the Barefoot Contessa the way some women love chocolate. To me, she can do no wrong. I mean the woman can build a charcoal grill, grow herbs without killing them and drink while cooking without, apparently, getting drunk. If that’s not rock star material, I don’t know what is.

She can also roast a chicken. Which I couldn’t, until she came along. The first time I even had roast chicken outside a restaurant was at my friend Sam’s house. She had inverted the chicken on a beer can chicken rack and produced a moist, succulent bird that clearly had been born for the purpose of filling our stomachs.

Sam even sent me one of those cool beer can chicken rack things and while you can lead a cook to beer, you can’t get her to successfully roast a chicken on a beer can rack. Mine sucked. And by “sucked,” I mean it was inedible – dry in some places, fleshy and pink in others. In short, it was the kind of hot mess that makes vegetarians nod their heads knowingly: animals are our friends, not our food, you can almost hear them saying.

Next I tried to roast a chicken on – gasp! – a roasting pan. Yes, a pan designed specifically for roasting chickens. I followed the directions included with the pan which resulted in a decently cooked but rather bland bird. Apparently, nonstick roasting pans equal low-fat cooking, which equaled my mother and stepdad politely eating the meal I placed in front of them but insisting they were too full for seconds.

Undaunted, I turned to that most patient of teachers, the television set. There, in an episode entitled “Chicken 101,” the Barefoot Contessa effortlessly produced a roast chicken so satisfying, so amazing, so Barefoot that her husband eats it every Friday night. That is one loyal dude.

I figured third times a charm, and what a charm it was. Folks, this recipe is easy, impressive and – most important – cooks exactly the right way every damn time. I have no idea how the Barefoot does it, but I swear her recipes are fool proof (and I mean fool in the kindest of ways). I hadn’t really given it much thought until my friend Shelly told me she tried this recipe and told me it was dead right: the chicken is perfectly done in an hour and 15 minutes. And as Deb at Smitten Kitchen points out, the Barefoot’s recipes really are the picture of culinary perfection. The first (and still only) cheese soufflé I’ve ever made came out splendidly, and I owe it all to Barefoot in Paris.

Don’t get too caught up in thinking you have to precisely truss your bird or that you must have the perfect dish in which to roast this chicken. I use an old Pyrex casserole dish and don’t even bother to rest the chicken on any of the vegetables. Don’t skip the sauce – it’s easy to make and adds so much to the dish. The lemons that roast along with the chicken are also a treat, albeit one that takes a little getting used to. I don’t really vary from the original recipe too much, although I do add more flour than Ina calls for, but whether this speaks to my (lack of) sauce making abilities remains to be seen. 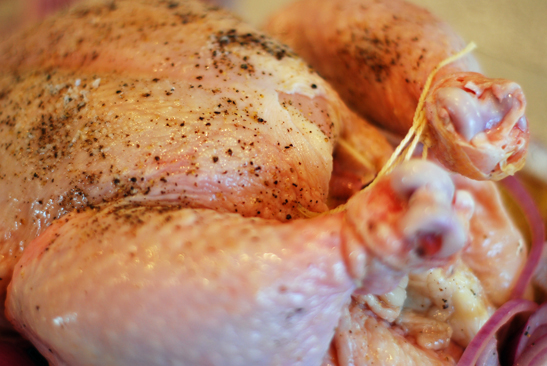 Oh, just one more little anecdote. A few weeks ago I was headed out the door to my French cooking class and wanted to have leftover chicken the next day for lunch. In about 25 minutes, I prepped this dish all the way through step 7, then plopped it in the fridge until my Gonzo husband could come home and plunk it in the oven. The result?

A few hours later I returned to the amazing aroma of roasted chicken filling every nook and cranny of our house, and believe me when I say there is nothing hotter than a guy who can roast a chicken. That, I’m guessing, is why Ina calls this her Engagement Roast Chicken: because you’d marry the chef all over again just for another bite. 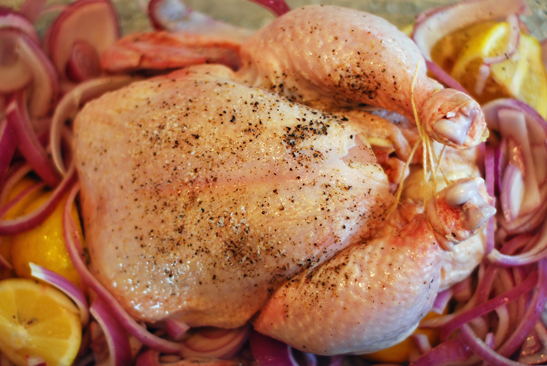 1.  Preheat your oven to 425° F.
2.  Working from both ends if need be, remove all that stuff from inside the chicken.
3.  Rinse in cool water, then pat the outside of the chicken dry with paper towels.
4.  Place the chicken in a large casserole dish or raosting pan (11×14 inches should do). Sprinkle a teaspoon each of kosher salt and black pepper inside the bird. Next, stuff the bird with 2 quarters of the lemon and both halves of the garlic.
5.  Smear chicken with olive oil (2-3 tablespoons should do), and sprinkle with a teaspoon each of kosher salt and black pepper, more if you’d like.
6.  Using kitchen twine, tie the chicken’s legs together as best you can and tuck the wings under the body.
7.  In a separate bowl, combine the onions, remaining lemons, 2 tablespoons of olive oil and a teaspoon of salt. Spread this mixture around the chicken.
8.  Place the chicken in the oven and roast for 1 hour and 15 minutes, until a thermometer registers 170° F.
9.  Set the chicken on a carving board and cover with foil, allowing it to rest while you prepare the sauce.
10.  Remove the onions and lemons from the roasting pan, set aside, covered with foil to keep warm.
11.  Scrape the liquid from the roasting pan into a sauce pan set over medium-high heat (if your roasting pan is stove-top proof, just use that).
12.  Add the wine and stock, stir to combine.
13.  Sprinkle in the flour, then stir continuously for a minute or two until the sauce thickens. Add a bit more flour, a teaspoon at a time, if needed to thicken the sauce.
14.  Carve the chicken and serve with the onions, lemons and sauce.

Adapted from a recipe by Ina Garten.